AGWN spoke to Kirsten Lacy, Director of the Auckland Art Gallery about the challenges she has faced in her career, subsequent successes and the advice she has for career development.

Kirsten tells us that while her career has been deliberately planned, it has also developed alongside her growth as she discovered her strengths. After gaining a Bachelor of Fine Arts, she ran a gallery with friends in Melbourne and found she excelled at organising events and exhibitions. Kirsten went on to complete a Masters in Curatorship and her first fixed curator position was at Shepparton Art Museum north of Melbourne. A year and a half later she stepped into the director role at only twenty-seven years old. Kirsten says she had found an aptitude which she could partner with her passion for the arts and belief in its cultural, economic and social importance.

This passion is the fuel behind Kirsten’s work educating local government about the arts sector which she tells us is a critical, and challenging task. In Victoria, this was exacerbated by the high turnover of mayors, CEOs and council board members. With each new appointment, the conversation needed to be re-started, explaining the role of arts and culture in building the liveability and social fabric of a city and why it’s worth investing in.

Adding to this challenge in Shepparton was the fact that it was the lowest socio-economic area in Victoria. The agriculturally dominant region had suffered decades of drought followed by floods so trying to grow the arts in a community with so much need was very difficult.  By partnering with the local business community Kirsten listened to the challenges they faced and then pitched how the gallery could help by providing an alternative source of revenue and employment. She secured a valuable collection of aboriginal art to be bequeathed to Shepparton on the condition that a new museum was built to house it. She had been told by her first boss that she would never get a new gallery built in Shepparton in his lifetime or hers. Kirsten vividly remembers thinking “well you watch me.” The new building will open on the 1st of February 2021. 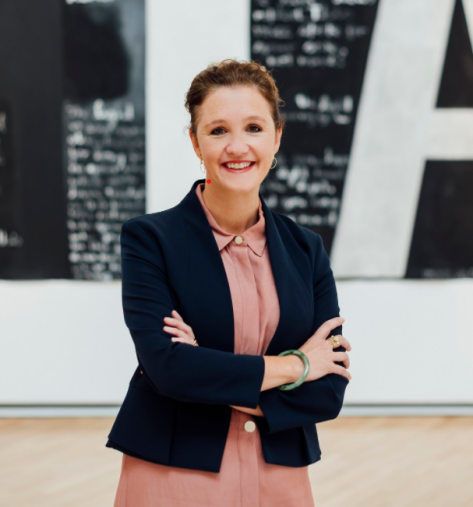 “If we had a joined approach with other agencies on the arts and cultural impact in Auckland, we could tell a powerful story.”

Kirsten says that in Australia they had to get very good at proving their impact by using data. This is something still to be achieved in NZ as the data doesn’t currently provide a cohesive story of our sectors impact and importance. “If we had a joined approach with other agencies on the arts and cultural impact in Auckland, we could tell a powerful story.”

To stimulate such dialogue, Kirsten has produced a YouTube series called Cultured Conversations. The goal of this series was to learn and share knowledge with a wider group, develop relationships and bring attention to the role of the arts during a time of public trauma. It has helped her with the critical questions the gallery is confronting. What does philanthropy look like in the COVID era and what has government policy done in respect to the arts sector in Aotearoa and Australia.

Kirsten is Auckland Art Gallery’s second female director and they have an all-female leadership team, which she says is rare. In Australia, the sector is run mostly by women however men have almost always held the top jobs at the major state and national institutions. When she began her role in Auckland, data was compiled to see how the gallery performed on gender equity regarding the artists they featured and the awards that were won. The results which were published on the gallery walls informed programmatic and collection development decision making going forward.

“Wellbeing of the body, spirit and the mind is critical for anyone who’s in a leadership role.”

Kirsten’s advice for furthering career development is to first define your purpose, then identify the best vehicle to deliver it through. Some skills might not come as naturally as others but there is no limit to what you can learn. For anyone looking to pursue leadership roles, she stresses the importance of having mentors as well as mentoring others. Participate in quality leadership programs and focus on self-growth. “Wellbeing of the body, spirit and the mind is critical for anyone who’s in a leadership role.”

Back to Auckland GWN Stories & Profiles