At every stage of her 28-year career with New Zealand Police, Assistant Commissioner Sandra Venables has blazed a trail for others to follow, continuously pausing to pull other women forward with her.

Now she’s been recognised for her contribution as the winner of the 2022 International Association of Women in Policing (IWAP) Award for Mentoring and Coaching. The award was presented this week at the IWAP Annual Conference in Niagara Falls, Canada.

Sandra’s citation described her contribution to building an inclusive culture that enables women in the New Zealand Police to thrive, saying that impact “cannot be understated”.

The Mentoring and Coaching Award recognises a female officer who distinguishes herself by her support, assistance and development of women in law enforcement by focusing on their career aspirations, their ongoing personal development and/or producing training programmes or policies which enhance the role of women in policing.

Sandra's ability to influence and enable others was evident from the outset, graduating from The Royal New Zealand Police College with the Commissioner’s Award for Leadership.

It was the start of a career characterised by a commitment to lead the way for women in leadership and to guide them towards the highest echelons of New Zealand Police.

In the words of Inspector Whiti Timutimu, one of the co-leads for the Mana Wāhine network: “Sandy has allowed us to have mana motuhake, to be able to self-determine our future. A humble woman and leader who has gone beyond her role to influence, enable and encourage our Mana Wāhine group to thrive”.

It also speaks to the way she supports other women to develop, particularly in leadership, and always follows through on making that happen.

“[Sandra] is always available to support and encourage others herself. However, she also supports them to support one another by creating a culture of trust, mutual respect and inclusion… Through her ground-breaking approach to leadership, Sandy has distinguished herself as a leader who demonstrates a deep and authentic commitment to women’s career and personal development.”

Last year, Sandra was the winner of the prestigious Bev Lawson Award during the 22nd Australasian Council of Women in Policing Awards.

A snapshot of AC Venables’ career: 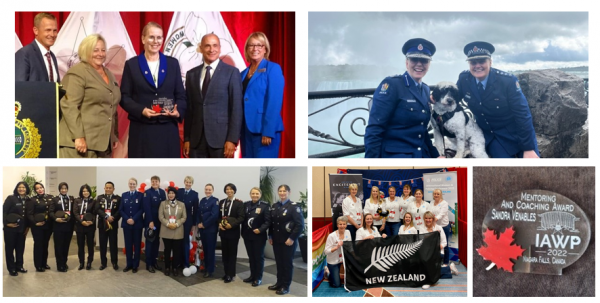