Department of Corrections Offender Employment Instructor, Krystal Paix, sustained a hairline fracture just above the left knee during a shift in the Central Kitchen at Christchurch Men's Prison back in 2018.

As the fracture was undiagnosed, Krystal continued to use it despite severe pain. Without a proper diagnosis, the bone eventually gave way and snapped completely. Krystal shared her story with SGWN and some key lessons and insights which helped her stay positive.

After the bone broke, I underwent surgery following emergency transfer to the ER, and they inserted a rod into my femur in the hope that the bone would grow and fuse around it. However, 10 months later, there was insufficient bone growth – what they call nonunion – resulting in additional surgery. I underwent a second surgery in March 2019 where they removed the rod, did bone grafting, and inserted plates.

All the progress I had made before the second surgery was null and void, and after not using my left leg and foot properly for over 24 months, there was a significant loss of strength and muscle wasting. Basically, I had to learn to walk again, which meant building up all those small muscles in your feet that work together to coordinate basic movement and balance.

Recovering from the setbacks

I returned to work in May 2019 on light duties as part of a graduated return to work programme, gradually increasing my hours. By this stage, I had been told countless times over by an array of professionals that I would most likely never walk properly again, walk unaided, and that my chances of returning to work were slim.

I took a month off in November, visited Phuket, and volunteered at an elephant rescue sanctuary. Many of these animals had severe health problems after being subjected to years of working in forestry and carrying people, which is literally back-breaking work. It was the spirit of these animals I found most enduring. Despite their suffering, they had incredible resilience. Something I was able to tap into subconsciously, I think. I spent my downtime in the company of Buddhist monks, which was an equally enlightening experience.

Soon after my return home, scans revealed good progress in terms of bone growth. I could finally give up the crutches (but not, unfortunately, until after my graduation ceremony at the University of Canterbury, where I also took out the prestigious Graduate Women New Zealand Susan Byrne Memorial Award for academic excellence and women in non-traditional fields... my son had to collect my degree for me on stage as Spiderman!)

By early 2020, although I was still assigned light duties, I was back to a 40 hour week. From here, I started working with the PE team in the gym and gradually built up strength until I felt strong enough through my lower body for the Physical Readiness Assessment (PRA) and Tactical Options training. Every lunch hour I would meet with the team and we would practice the PRA – and it paid off. I completed the PRA in early August and was due back in my pre-injury role in early September.

Pete (pictured below) took me for my training when I first joined the job. He’s always been very professional, good natured and supportive, so I had a really good foundation to begin with. There was a lot of collaboration between my own rehabilitation physio and the wider PE Team. 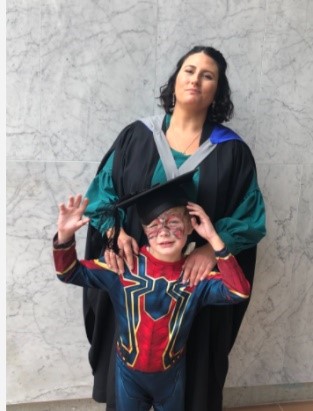 I believe there is a greater purpose to most things. For me having a son that is young and impressionable drives me harder in most facets of my life in order to portray women as capable and set the right example for his future in terms of gender expectations. A lot of really good, positive things have come out of this experience also so it’s important to see the whole picture.

I would say to anyone facing similar challenges – be proactive about your health, be open about where you are with it and devise a plan.